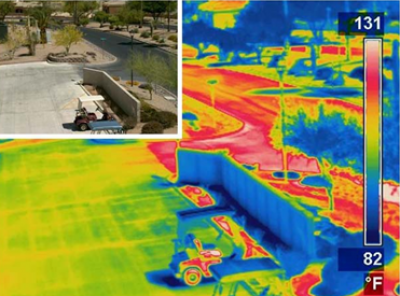 Lighter-colored pavements are more reflective, which cools the surface temperature during hot summer days. (Image courtesy of the ASU's National Center of Excellence on SMART Innovations) 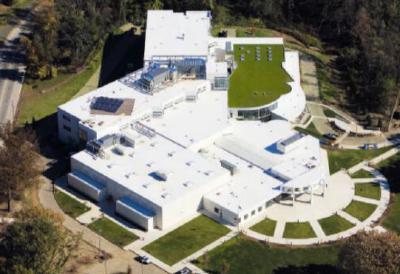 On a sunny summer day, a new flat white roof can reflect up to 80% of the incident sunlight and can reduce air conditioning costs by 10-15%, depending on the region. (Image courtesy of Department of Energy)

Roofs and pavements comprise over 60% of urban surfaces in some U.S. cities.1 On a sunny summer afternoon, these typically dark, dry surfaces get warm in the sun and in turn heat the air. The air in nearby rural areas tends to be cooler, because the rural surfaces are more reflective (absorbing less sunlight) and wetter (dissipating some solar heat gain by evaporating water). This elevation in urban air temperature over rural air temperature on a summer afternoon is called the summer urban heat island (UHI) effect. Other contributors to summer urban heat islands include human activities that warm the outside air, such as air conditioning, manufacturing and transportation. UHIs can increase energy use, degrade air quality and aggravate heat-related illnesses in our cities.

Summer urban heat islands result from solar heating of dark, dry urban surfaces. Sunlight is absorbed by dark pavements and roofs, which in turn warm the air. Air itself absorbs very little sunlight, but can be heated as it flows over warm surfaces.

Interestingly, slightly less than half of sunlight is visible to the human eye. Light-colored surfaces stay coolest because they strongly reflect both visible and invisible sunlight. However, when dark surfaces are needed for aesthetics or to reduce brightness, one can use special "cool-colored" materials that stay moderately cool by reflecting only the invisible component of sunlight.

We also study urban trees, which cool the air by evaporating water and cool surfaces by providing shade.