Thermal infrared (left) and visible (right) images of a road with light and dark segments. The infrared image shows that the light segment (bottom) is about 17°C (30°F) cooler than the dark segment (top). (Image courtesy of Larry Scofield, APCA) 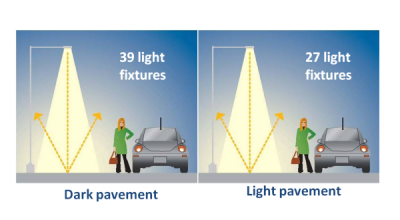 Reflective pavements can reduce the need for street lighting at night. (Image courtesy of Stark 1986) 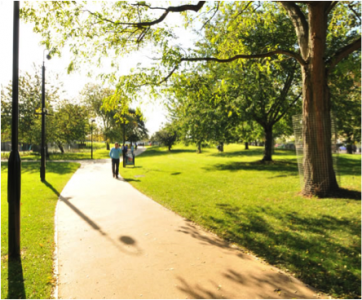 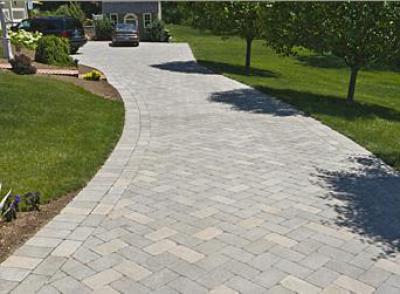 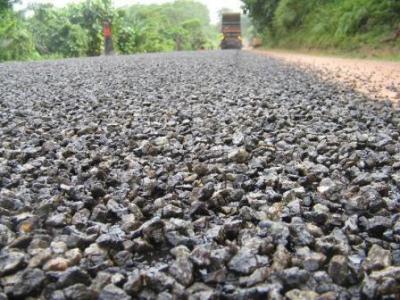 Solar reflective "cool" pavements stay cooler in the sun than traditional pavements. Pavement reflectance can be enhanced by using reflective aggregate, a reflective or clear binder, or a reflective surface coating.

Recent research in California has led to important findings on penalties and benefits from deploying cool pavements in cities across the state. See the key take-aways from this research below.8

Cool pavements can be made from traditional paving materials, such as cement concrete. New cement concrete has a solar reflectance (SR) of 30–50%. There are also novel cool-colored coatings for asphalt concrete pavements that reflect about 50% of sunlight. Another approach is to use a clear binder that reveals highly reflective (light-colored) aggregate.

As with all materials exposed to the atmosphere and use, the solar reflectance of pavement can change over time. For example, as cement concrete pavement ages it tends to get darker with tire and grease stains (new SR 30-50%; aged SR 20-35%), but asphalt concrete lightens (new SR 5%; aged SR 10-20%) as it ages because the asphalt binder oxidizes and more aggregate is exposed through wear.

Levinson, Ronnen M, and Hashem Akbari. "Effects of composition and exposure on the solar reflectance of portland cement concrete." Cement and Concrete Research 32 (2002) 1679-1698.