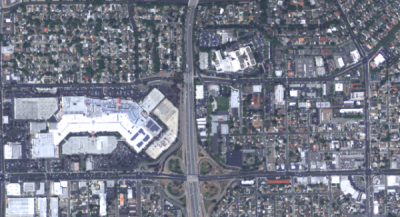 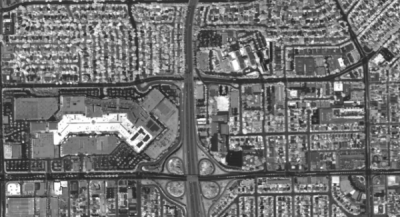 The project results led to the development of an interactive rooftop reflectance map for 5 California cities. View the map at AlbedoMap.LBL.gov.

In most instances, the solar reflectance of a roof is directly proportional to how light-colored the surface is. For example, white roofs are more reflective than black roofs. This property is an observable consequence of a surface's ability to reflect visible light. However, surfaces may also reflect solar radiation in the near-infrared (IR) spectrum, which is invisible to humans. (Examples of surfaces that reflect near-IR radiation well are vegetation and human-engineered materials that may be dark-colored but still reflect invisible light.)

The California Roof Albedo project, sponsored by the California Air Resources Board, aims to improve measurements of solar reflectance throughout California, using high-resolution aerial imagery to measure reflectance of visible and near-IR radiation. For our study, we will use images taken of California in 2009 by the National Agriculture Imagery Program (NAIP) of the U.S. Department of Agriculture. These images are high-resolution and capture both visible and near-IR reflectances. Such "color infrared" (CIR) imagery contains reflectance information in four bands – the red, green, and blue bands of the visible spectrum and a near-IR band at an invisible wavelength.

The resulting analysis of this imagery allowed us to more accurately characterize the surface albedo of various areas of California, with the ultimate goal of creating digital maps of roof reflectance by region. We will also be able to better summarize California's current roof stock and identify regions that should increase the reflectance of their surfaces.