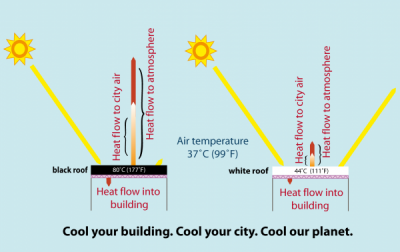 The benefits of cool surfaces are not restricted to buildings and cities; the higher solar reflectance of cool surfaces results in less thermal emittance into the atmosphere, meaning that cool surfaces can help to cool the Earth. (Image courtesy of Heat Island Group, Lawrence Berkeley National Laboratory)

In light of the severity and imminence of global warming's consequences, many have proposed using geo-engineering as a means to act swiftly against climate change. Geo-engineering techniques under consideration include solar deflectors, atmospheric aerosols that increase stratospheric and/or cloud reflectivity, and advanced methods of carbon capture and sequestration, among others. However, these methods are expensive and unproven, making them high-risk propositions.

Cool roofs and pavements represent a far simpler geo-engineering approach that has a proven record of efficacy. Existing technologies can increase urban surface albedo by around 10%.1 The benefits of this capacity on buildings and cities have been well documented, but cool surfaces are increasingly being scaled up in cities across the world as a means to mitigate the urban heat island effect.11

However, the benefits of cool surfaces are not restricted to the cities in which they are utilized. By increasing the albedo, or solar reflectance (SR), of surfaces such as roofs, pavements, and cars, the surfaces absorb less solar heat and thus transmit less heat back into the environment. This process, called "negative radiative forcing," effectively cools the environment and offsets substantial quantities of greenhouse CO2. A recent study estimated that increasing the albedo of roofs and pavements in all global urban areas by 25% and 15%, respectively, offsets roughly 57 gigatonnes of CO2.12

These carbon savings can substantially slow the rate of climate change and delay the worst impacts of global warming. As more cities around the world implement cool surfaces, the global benefits will accrue even faster.