‘Cool Walls’ Get a Boost from U.S. Green Building Council 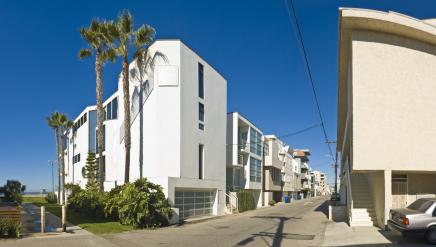 Sunlight-reflecting “cool walls” have been shown to reduce energy costs by lowering heat gain in buildings. But they do more – reflective walls can also cool cities, fighting the urban heat island effect. The concept has new support from the U.S. Green Building Council (USGBC), which has issued a pilot credit for the installation of cool exterior walls in new homes, schools, and commercial buildings to mitigate urban heat islands.

With the pilot credit, this is a test integration for cool walls into the USGBC’s Leadership in Energy and Environmental Design (LEED) ratings for buildings. LEED standards raise the bar for energy efficiency, water conservation, waste reduction, and other aspects of a building’s construction and operation. Building owners seeking to meet a LEED standard take steps that earn them points toward certification.

The pilot credit was written by Lawrence Berkeley National Laboratory (Berkeley Lab) scientist Ronnen Levinson based on peer-reviewed research by the University of South California (USC) and Berkeley Lab. That study found that reflective walls could lower urban air temperature much like reflective “cool roofs.”

The newly issued pilot credit means buildings that satisfy specific cool wall requirements will earn an innovation point in LEED. After a trial period, USGBC will decide whether to add the pilot credit to its permanent library.

Making a wall cool is a relatively simple endeavor, but it can have big payoffs.

The idea is to surface exterior walls with a solar-reflective paint or cladding. Reflecting sunlight out of the city reduces urban heat. To qualify for the LEED pilot credit, buildings must cover 75% of a building’s exterior with a cool wall material that reflects at least 60% of sunlight, among other specifications.

Cool walls are also gaining acceptance as a way to reduce energy costs and greenhouse gas emissions in buildings. Through a nationwide study, Berkeley Lab researchers found that in warm U.S. cities from Miami, Florida, to Albuquerque, New Mexico, and all across California, cool walls could provide energy savings and greenhouse gas emissions reductions in homes, offices, and stores comparable to those from cool roofs. Recently, the American Society of Heating, Refrigerating and Air-Conditioning Engineers (ASHRAE) published an addendum to its “90.1” energy standard for buildings (except low-rise residential buildings) that credits cool-wall energy savings in performance compliance for the standard. Levinson provided technical guidance to ASHRAE as it worked on the update.

“Cool wall materials, such as light-colored paints, are available today at no extra cost,” Levinson said. “Choosing them for new construction or routine repainting is an easy and affordable way to make our cities cooler and safer while lowering your energy bill.”

The study that informed this pilot credit was led by Jiachen Zhang and George Ban-Weiss of USC. The work was funded by the California Energy Commission’s Electric Program Investment Charge (EPIC) program.