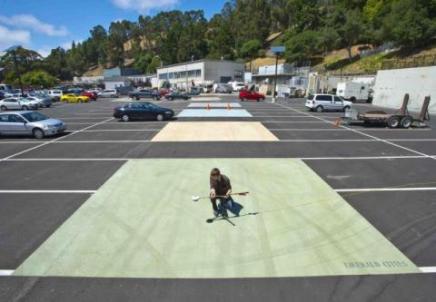 On those sweltering summer days—when it's too hot to play at the playground, when it seems like you could fry an egg on the pavement, when your car feels like an oven after a couple hours parked at the mall—it's not just the beating sun that's driving up the temperature. It's our very urban environment, in which most of our paved surfaces are dark, absorbing almost all of the sunlight that shines down on them.

In a typical city, pavements account for 35 to 50 percent of surface area, of which about half is comprised of streets and about 40 percent of exposed parking lots. Most of these streets and parking lots are constructed with dark materials. "It's amazing how hot these pavements get and how we've let them cover most of our urban surfaces," said Haley Gilbert, a researcher in the Heat Island Group of Lawrence Berkeley National Laboratory (Berkeley Lab). "Because dark pavements absorb almost all of the sun's energy, the pavement surface heats up, which in turn also warms the local air and aggravates urban heat islands."

To combat this problem, Berkeley Lab scientists have been studying "cool pavement" technologies. Like cool roofs, which are lighter-colored roofs that keep the air both inside and outside the building cooler by reflecting more of the sun's energy, cool pavements reflect as much as 30 to 50 percent of the sun's energy, compared to only 5 percent for new asphalt (and 10 to 20 percent for aged asphalt).

Now the Heat Island Group has converted a portion of a new temporary parking lot at Berkeley Lab into a cool pavement exhibit that will also allow them to evaluate the products over time. The parking lot provides an opportunity to feature cool pavement coatings that are applied directly to existing paved surfaces. Currently, the exhibit features six coatings donated by two manufacturers, Emerald Cities Cool Pavement and StreetBond. The Group is also coordinating with additional manufacturers to apply their technologies in the coming months.

Cool pavements can either be made from traditional pavement materials that are lighter in color and therefore have a higher solar reflectance, such as cement concrete, or can consist of cool-colored coatings or surface treatments for asphalt surfaces. The Heat Island Group works with both the asphalt and cement industries. "An ideal design goal would be a pavement with solar reflectance of at least 35 percent," Gilbert said. "How you get there will vary by project."

Sealcoats are a common maintenance practice for parking lots and schoolyards since the asphalt pavement structure degrades over time. Traditional sealcoats provide a protective layer, keeping water out and helping to slow the oxidation of the asphalt in the pavement structure, while restoring the aged asphalt surface to a jet-black color. "The cool pavement coatings we're exhibiting can be applied to existing asphalt or cement," Gilbert said. "They can be used in lieu of a sealcoat, and are a good strategy for cities looking to introduce cool pavement technologies."

Cool pavements come in different hues, including green, blue and yellow, and their solar reflectance value depends on both color and material. "There are some colors that look dark but are actually more reflective in the near infrared spectrum," said Benjamin Mandel, another member of the research team. "These products have higher solar reflectance values than one might initially believe because they are specially designed to reflect invisible infrared light."

With the exhibit now open at Berkeley Lab, the scientists will be collecting data to see how the coatings fare over time. "At some point they will reach an equilibrium at which the solar reflectance won't degrade much anymore," Mandel said. "We're also very interested to see what happens when it rains, which may help the coatings self-clean and restore higher reflectance."

The benefits of cool pavements extend beyond just cooling the local ambient air. They can also impact global warming and energy loads. Dark roofs and dark pavements both contribute to global warming by absorbing large amounts of solar energy stored in sunlight, then radiating the energy back into the atmosphere in the form of heat. Gilbert added: "Across an entire city, small changes in air temperature could be a huge benefit as it can slow the formation of smog. Just a couple of degrees can also reduce peak power demand, by reducing the energy load from air-conditioning."

Additionally more reflective parking lots could allow building owners and cities to save on energy needed to illuminate streets and parking lots. "Chicago has reported energy savings from using solar-reflective pavements in its alleys," said Gilbert. "Quantifying that would be something a business, such as Walmart, could literally take to the bank."

While many of these benefits have been confirmed by scientific models, field studies are needed to verify and quantify the results. Berkeley Lab is now leading a study in collaboration with the UC Pavement Research Center that will closely monitor the solar reflectance values and temperatures of 20 x 24 square-foot pavement sections of six different materials on a residential street on the UC Davis campus. The scientists hope to better understand how changes in solar reflectance over time affect heat transfer throughout the pavement structure. The results may assist policymakers and pavement professionals in making informed decisions regarding cool pavement requirements for building codes and project specifications.

Better data may also help sell cool pavement coatings since they tend to be more expensive than traditional sealants. Another hurdle is that the benefits of cool pavements are more for the public rather than the building owner. But Mandel points out that cool pavements can eventually pay for themselves. "The benefits are less immediately tangible than for cool roofs," he said. "But the initial cost premium can potentially be offset over the lifespan of the product with increased durability and less need for ongoing maintenance, which are factors we are working with manufacturers to investigate further."

Since cool pavements benefit the community, the Heat Island Group is focusing much of its technical assistance and outreach efforts on local governments. To that end, the Heat Island Group held a pavement seminar in June for local officials to learn about the benefits of cool pavements. In addition, schoolyards are a particular target because of the negative health implications of hot blacktops for schoolchildren. "It was shocking for us to hear that here in Berkeley, which has a pretty mild climate, students are not allowed to go out and play on the blacktop basketball courts on certain days," Gilbert said.

"People in California now know the term, 'cool pavements,'" said Gilbert. "That's a huge step forward, but we still need to do more to get the word out."