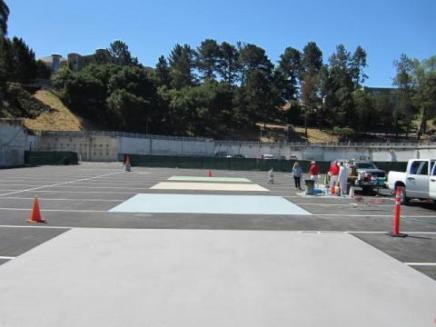 The Heat Island Group, in partnership with the Facilities Division, has launched an exhibit of “cool” pavement technologies in the newly-opened Bevatron parking lot, unveiling four solar-reflective coatings donated by Emerald Cities Cool Pavement. This showcase of Berkeley Lab’s cool pavement research is part of a cooperative effort with the State of California to advance the use of cool pavements, including an upcoming pilot project at school playgrounds.

The first installment of cool paving materials was applied in the parking lot on Tuesday, June 12. Additional reflective pavement products from other vendors may be installed in the coming weeks and months.